Designing a poster has many aspects in common with writing a theatre review – it’s essential to get across something of what the production is about, while at the same time producing an image that’s striking enough to grab the potential audience’s attention.   As a photographer once said about his production photographs displayed outside the Royal Court Theatre – “My job is to get their bums off the Sloane Square buses and onto the Royal Court seats …” 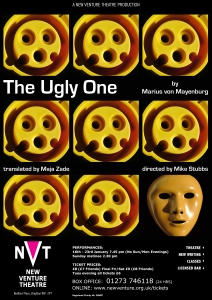 ‘The Ugly One’ is probably a good place to start.   A play about a man, a very good and kind man,  who is so spectacularly ugly that even his wife can’t bear to look at him.  He’s an engineer, designing electrical connectors in his job, but his appearance is blocking his career advancement.  A plastic surgeon makes him stunningly handsome, after which (of course) he becomes a complete bastard.  But the surgeon carries out the same procedure on a host of other men, and finally the (ex) Ugly One is surrounded by lookalikes, and no longer special or highly regarded.   I had to search a bit to find a suitable yellow cable connector.      As with all these poster images – just click on the image to see it bigger. 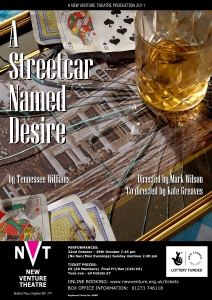 As a photographer, a lot of my posters use a photograph as the starting point (and I make no apology for that …).  For ‘Streetcar’, I wanted to capture the macho violence of Stanley Kowalski’s life, and how it destroys Blanche’s memories of the Antebellum Southern mansion where she grew up.  Smashing the glass was tricky, but not as much as getting the fracture lines to show up.  The whiskey was real, and got drunk several times before I was happy with the shot …   I was careful to include a Jack and a Queen in the poker cards. 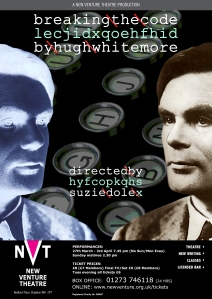 ‘Breaking the Code’ couldn’t be more different.   Alan Turing was a mathematician whose wartime work helped build the first computers.  These were used to decode the messages encrypted by the German military using the ‘Enigma’ machine.  ‘Enigma’ turned clear text into gibberish, and back again for the recipient.  I was intrigued that the play’s title had the same number of letters as the author’s name, so I used that in the poster’s wording.   Turing himself was homosexual, illegal in the forties, with a secret life (he committed suicide after being convicted of the offence).  Earlier last century gays  were defined as ‘inverts’, so I’ve shown  Turing both positive and in negative – (or clear and encrypted …) 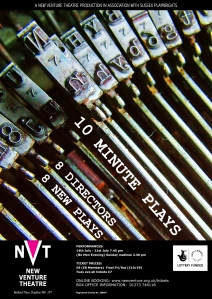 This one could really only be done using photography – nothing else would have got the close-up detail in the typewriter typebars.   The poster for NVT’s  ’10 Minute Plays’ competition had to portray the concept of ‘writing’, as it’s an evening of newly-written plays … though I wonder how many of the authors actually used a real typewriter?    The design also allowed me to be bolder with the text alignment.   Luck plays a part, as in so many projects – I wanted to feature on the ‘N’ typebar (as in New Venture) and only realised later that I’d managed to include the 8 as well. 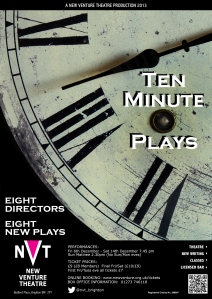 Another year, another competition, and so another poster.  This time I went for the ‘ten minute’ aspect.  Still chasing that 8  –  VIII in this version, of course  –  and so the whole thing became rather Gothic … 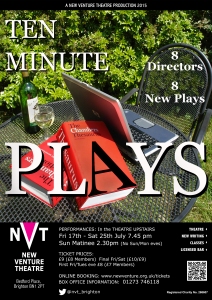 And again …      I went for the text option for this year’s competition.  Words words words. And the wine helped too, naturally! 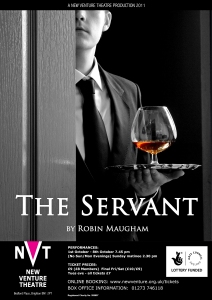 ‘The Servant’ is a slightly clunky play that was also done as a great sixties’ black and white film. It’s about a rich man who returns from Africa to London and whose friends find him a house and a manservant to look after him.  A psychological study of dependence, as the manservant feeds his addiction to alcohol – and working-class women – and gradually comes to be the dominant personality.  The photograph is in B/W as I wanted to keep some of the sixties style and contrast, while pulling the viewers’ attention to the brandy – the one spot of colour in the whole image.  Not showing the eyes seems to make the figure seem more sinister, and hopefully quite disturbing. 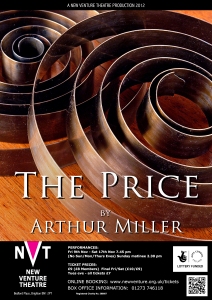 ‘The Price’ is a play about two brothers who argue about their dead father’s possessions, for which they want to get ‘a fair price’ when they sell them.  Being Miller, the play is really about unresolved family tensions between the two ageing men.  The action takes place in New York, in the attic of the family home, surrounded by long-forgotten objects.  I saw the clock springs in a local horological shop, and they seemed to sum up the tensions between the two brothers, as well as the broken-down state of many of their late father’s things. 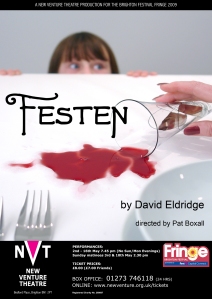 ‘Festen’ is another family drama, Danish this time, about the celebration (Festen is the word in Danish) of the 60th birthday of the head of a large and bourgeois family.  At the dinner, the eldest son publicly accuses his father of sexually abusing both him and his twin sister (who has recently committed suicide) while they were children.  The family initially rallies round the father to support him, but the presence of a young granddaughter forces them to face up to what has actually occurred.   I wanted to show the child, confronted with disturbing events that she cannot understand, and also give a sense of the shattering of comfortable social conventions. 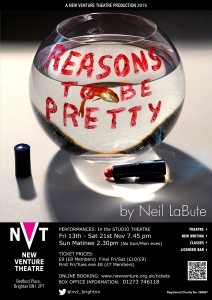 Posters need a strong image which conveys as much of the production’s themes as possible. Neil LaBute’s play ‘Reasons To Be Pretty’ is about people who have very few qualifications or prospects, and so fall back on their appearance.   When a character’s ‘beauty’ is questioned, she gets incredibly angry, even threatening too kill her boyfriend’s fish.   I wanted to use lipstick – something normally used to enhance beauty – as the medium for expressing extreme anger.

I couldn’t get the director to use it, though, and he went with his own design.  I was gutted – though not as much as the fish . . . 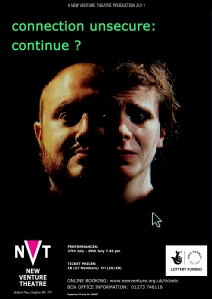 ‘Connection unsecure: continue?’ is a two-handed play about life online, and how we deal with virtual relationships – often at the expense of real ones.   The two characters spend most of their time communicating via their computers, and I wanted to give the sense of them as digital entities rather than flesh-and-blood beings.   Once you go digital, of course, you can combine images in completely new ways … 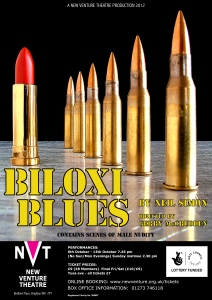 ‘Biloxi Blues’ tells the story of six young GIs at a basic training camp in Biloxi, Mississippi, in 1943.   They’re taught how to shoot and march, of course, but they also learn from each other about friendship, trust, race and class … and sex.   Two important women characters feature in the boys’ development, and I wanted them to feature in the poster too.  A rifle bullet has the same overall shape as a lipstick, and I wanted to explore the phallic subtext of both objects.   Plus – I love photographing metallic objects, they repay the effort needed. 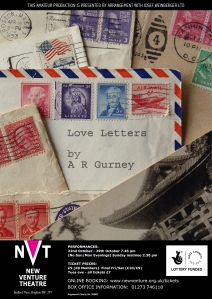 ‘Love Letters’ is a piece written by A R Gurney in 1988, and consists of letters and cards sent between two upper-class Americans over a period of fifty years.   They are meant to be read out by two actors seated at a table, like a rehearsed reading.  It’s popular with actors or celebrities, as they can fit it into a busy schedule without a rehearsal period.   When I came to direct the piece, I chose to do it with Andy (in the present, after Melissa’s funeral) reading his past letters to Melissa, and her replies being read by the actress seated at rear, under dimmer light, so that it was unclear whether she was Andy’s memory, or a ghost. 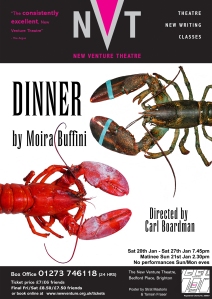 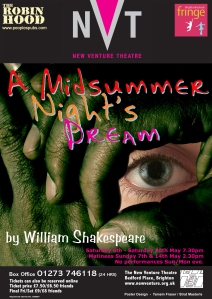 A different kind of celebration here – ‘A Midsummer Night’s Dream’ has the Rude Mechanicals performing the play of Pyramus and Thisbe for the court of King Theseus.  At one point the lovers glimpse each other through a chink in the Wall (another player, Wall, holds his hands to form a small aperture).   I wanted to get the effect of someone peering through a small chink, formed by meaty, dirt-stained tradesman’s hands, referencing that scene from the play, but also engaging directly with the viewer of the poster. 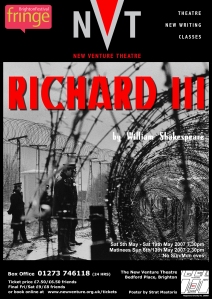 Plenty of violence in Richard III   The director wanted to set the play in the current era, and bring in references to imprisonment without trial at Guantanamo Bay.   I had a photograph I took years ago at Greenham Common, with razor-wire and police guarding the American cruise missile base.  It seemed appropriate to the theme of an overly oppressive police state … 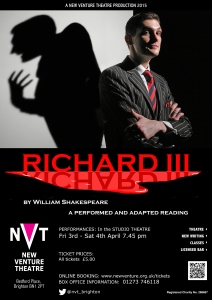 That production was in 2007, but in 2015 we did Richard lll again, as a rehearsed reading this time.  Something very strange happened to the shadows on this one. 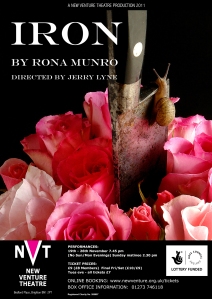 A lot of violence in the back-story of ‘Iron’ as well.   It’s about a woman who seemingly has murdered her husband, and spent years in jail as a result.  But there are deeper layers to the story, and she’s probably protecting her daughter.   You can read my critique of the play on the Analyses page of this site.   I wanted to produce a  graphic portrayal of a domestic killing.

The snail really did slither up the blade – it’s not been Photoshopped in . . . 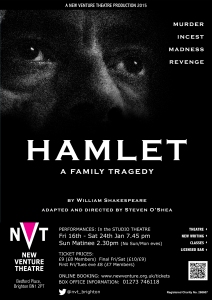 Another poster in black and white; another Shakespeare – ‘Hamlet’ this time.   I’m constantly trying to push the boundaries of layout, and I wanted the image to pull viewers into the poster and direct them towards the text at the upper right.

This was a cut-down version of ‘Hamlet’, with just the two families, and everybody seems to be watching or spying on each other.  The eyes could be the Ghost of Hamlet’s father, or they could be Polonius, watching from behind the arras, or Claudius racked by his guilt – or they could be Hamlet himself. 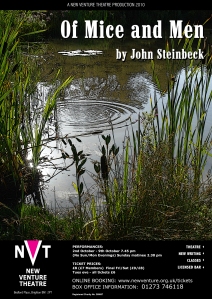 Here’s ‘Of Mice and Men’.   I hadn’t realised until we did the production that Steinbeck himself had re-written the book as a play.  I won ‘Best Lighting Design’ at the Brighton and Hove Arts Council Drama Awards in 2010 for the lighting on this one.  The director wanted  to show the river that George and Lennie reach in their travels, and that Lennie eventually dies next to.    I put ripples in (or rather, Tamsin chucked pebbles into the water) to give a sense of the consequences of events spreading out from their point of origin.   You’ll recognise the Marlboro typeface for the title, of course … 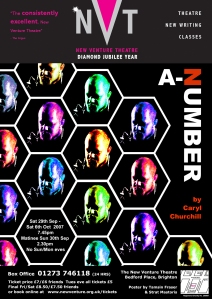 A lot of various elements go to make up a poster – the images, the layout, the text itself and its own arrangement within the poster layout.  Ideally everything should help to reinforce the poster’s message.

Caryl Churchill’s ‘A Number’ is about a father who has his young son cloned, and unknown to him the doctors produce a number of (obviously) identical boys.  Identical genetically, of course, but how much will upbringing and environment alter them?

Just two characters, with the younger one playing three of the cloned sons.  I took a photograph of the young man, then used a range of colour treatments to suggest different temperaments in the set of cloned individuals.  Putting the pictures into a hexagonal grid suggested the honeycomb structure of a bees’ nest, where individuals become workers or queens depending on how they are fed.  I tried to do the same with the title, too, using a typeface whose N is identical to Z, so that we read the letter based on its context.   Nature versus nurture.