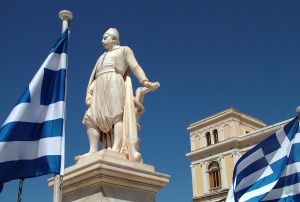 Following Cartier-Bresson, photographers often talk about ‘the decisive moment’, when everything comes together to make a photograph work.

That ‘moment’ may be ten minutes long, where the shadow of a shutter is falling in just the right position on a Madonna and Child in Venice, or five minutes when the evening sun has burst through a gap in the clouds at Fuengirola in southern Spain

Or it might be a mere fraction of a second, where the flapping flags are perfectly arranged around the statue of a Greek independence hero on Syros in the Cyclades. All the photographer can do is prepare – wait for the moment – and then take as many pictures as needed to get the desired result. 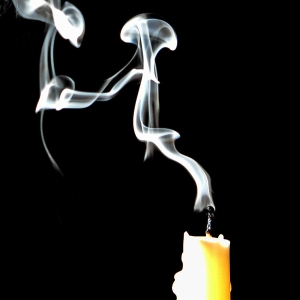 I had to snuff out the candle and relight it several times to find a smoke pattern I liked in this one.   I could quote Shakespeare to you – “Out, out, brief candle” – but as someone with an interest in science I find it fascinating that the rising plume of hot smoke interacts with the cooler air above to produce a mushroom effect. Same principle as the mushroom cloud that’s created by a nuclear explosion – but on a vastly smaller scale.

For classical string quartet ‘Bond’, I took lots of shots, as the women moved and the lighting changed.     With the bouquet at Lyn and Paul’s wedding, though,  there was really only the one chance . . .